Securitytalent.nl sat down with Mary-Jo to talk about her job and what she’s up to at the moment. As an Associate partner at Revnext, Vice-president of Women in Cybersecurity and President of the Platform Internet of Toys, there’s never a dull moment for Mary-Jo 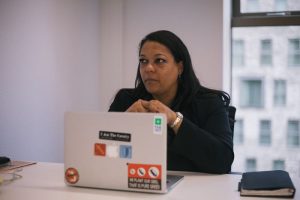 Associate partner at Revnext, what does that mean?

I work as a lead advisor on cyber security, innovation and strategic communication at Revnext . At Revnext we all have a specific expertise that we bring to the table. We offer custom solutions and strategic advise to companies in need of a specific cyber expertise. We really have a track record on subjects like forensics and cybersecurity, but also work cross sector in the fields of e-health, clean tech and logistics. We don’t offer a generic advise right of the shelf, but really dive into the details of every particular situation to come up with a bespoke solution. Furthermore at Revnext we praise ourselves for spending 21 percent of our profits on research and development. This gives us the opportunity to invest in subjects which are dear to us, such as standardization for the internet of things, cyberpeace and social return in cyber security.

What kind of projects are you involved with?

I am helping an organization set up an e-forensics department at the moment, guiding them and providing strategic advice. Furthermore I advice a big insurance company about their ‘Spaeklab’ on cybersecurity. With my platform Internet of Toys, a think and do thank, we expose vulnerabilities and security flaws in toys that are connected to the internet. For a presentation to former generals I reprogrammed Cayla, a cute internet connected doll, to speak a death wish in Arabic. You should’ve seen the look on their faces, they thought I’d lost my mind! I’m also publishing a lot of columns and articles on cybersecurity and internet of toys in various magazines and newspapers and speak at conventions on cybersecurity related subjects quite often.

Why did you pursue this career?

I’ve always been busy with computers and the technique around it. When I was 8 years I got a Commodore 64 that had a cassette deck connected to it. I bought new cassettes, recorded signals which were broadcasted through radio and connected it to the Commodore to see what would happen. Not much happened, but it was my first experiment with a computer. When the Commodore started to become boring I moved on to Nintendo, playing Mario for an endless amount of time. Later followed by the Sega and so forth, I was always busy with computers, gaming and experimenting with computer technique. When Interactive Voice Response Systems became popular, for example used by the ‘Belastingdienst’, I found out that you could skip the queue if you entered a certain combination of numbers while waiting. During my studies I found out that I wanted to be involved in more than the ‘hard side’ of IT (Security), just being busy developing and building things. I got more attracted to the ‘soft side’, so I decided to focus more on human aspects and resources instead of the machine part. That’s exactly what I’m doing now: helping clients with their cybersecurity issues within different perspectives.

Can you name a milestone in your career?

It’s difficult to name just one. We are doing so many cool things at the moment. Last week we made front page of an important Dutch Newspaper, Trouw, because of our investigation about data breaches within hospitals. It even reached the members of Parliament! A while ago I was in Dubai as a founder of the Holland Innovation House, when I got a call from the ambassador of Abu Dhabi. He heard about this Dutch initiative, where we presented 11 companies within cybersecurity at the biggest technology event in the world, GITEX, and wanted to know all about it. He also made me promise to continue my journey in order to gain access to international markets within the United Arab Emirates. It’s nice to see that what we are doing is being noticed. Also the moment when I was asked tot join the Speakers Academy was cool. I was like: “you want me to be a speaker on your roster? Really? Wow!” It’s cool to get acknowledged for your efforts in this way. Another thing that happened recently is that I’m a finalist for a prestigious cyber award in Great-Britain: Women in IT Award 2017. I’m the first ever non-British person to be nominated in this category, so that is a pretty big compliment. But maybe the coolest thing is that with two partners we recently discovered something that will lead to an invention. All in all it’s really nice to see that all the effort I have put in over the past years is getting noticed. 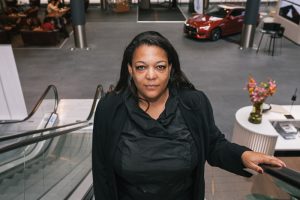 More on Mary-Jo de Leeuw? Read the rest of the interview at: https://securitytalent.nl/career/interview/at-the-university-i-got-more-attracted-to-the-soft-side-so-i-decided-to-focus-more-on-human-aspects-and-resources-besides-just-the-machine-part