A few weeks ago, the National Health Service was hit by a widespread and devastating cyber attack. Some hospitals and GPs were unable to access patient data, after their computers were locked by a ransomware program demanding a payment worth £230.

About 40 NHS organisations and some GP practices were hit throughout the United Kingdom. There was no clear indication of who is behind the attack, but the hackers demanded their payment in the virtual currency Bitcoin.

A BBC documentary on the NHS attack

On June 12, BBC 2 aired a documentary telling the inside story of one of the most challenging days in the history of the NHS. The documentary showed that on the morning of 12 May the attack started. Appointment systems, pathology labs, x-rays and even CT scanners were infected – putting not just data but patients lives at risk. On every screen a simple – some may even say polite – message appeared. ‘Ooops, your files have been encrypted!’

What followed however was far from civilised. It was very clear that all the data on an infected machine was now scrambled and only the hackers could unscramble it. For a price – and with an extra twist – after a few days the ransom money doubled, and if nothing was paid within a week, the hackers threatened to destroy all the data – forever.

Anouk Vos, partner at Revnext and cyber security lead, contributed to the BBC documentary by explaining that this was not a NHS targeted attack, but an attack that could hit any other critical infrastructure in the UK and beyond. 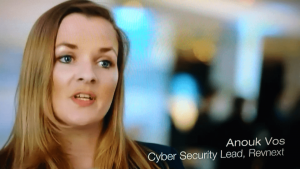 Watch the entire BBC documentary (with the contribution by Anouk Vos) at: